There are few things in life that are transformational. Events that leave you different than you were before. Occurrences that you mark your life by: BEFORE then AFTER. Events such as your wedding day. The birth of your children. Most of us go through life seeing hundreds of people on the street and we couldn't care two dimes who they are or what they've experienced. 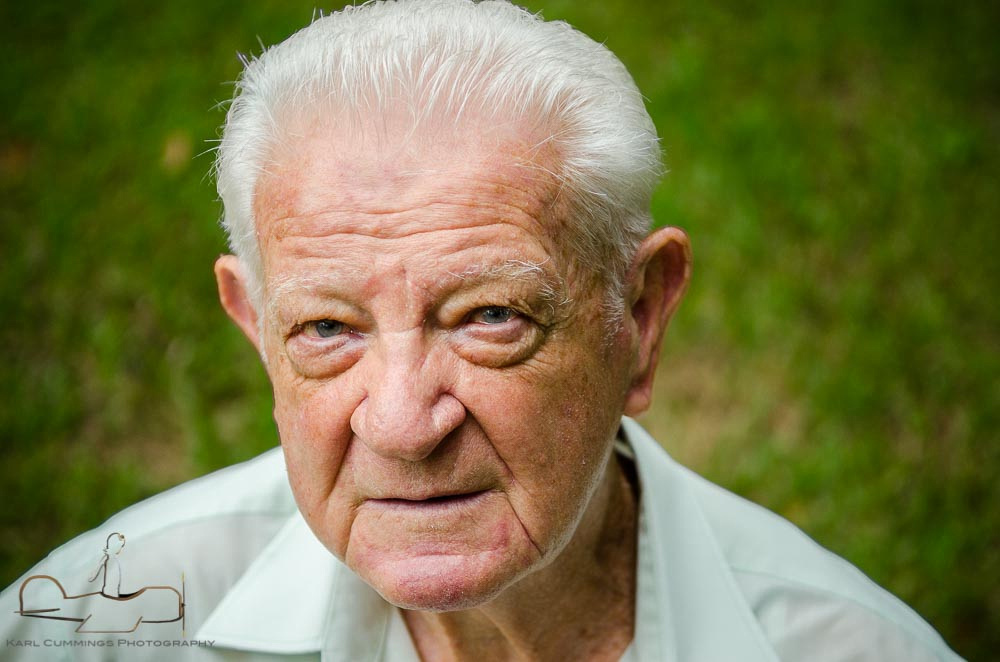 One Lucky GuyAnacortes, WA based Portraits and Fine Art Photographer

At 91 years of age, he clearly has some stories to tell. Stories that are swimming just below the surface of his gaze. Eyes that, were you to pass him on the street, may cause you to stop, ask if you can buy him a cup of coffee and if he'd be willing to share with you some of his experiences. And the stories he'd tell you would have you sitting riveted on the edge of your seat.

Andy Ramotnik is a singular individual in today's society, one of the few surviving of the Greatest Generation. But Andy Ramotnik is not surviving. He is thriving. And the reason, if you were to ask, is a simple answer: he's a lucky guy.

Most people would not consider being shot down on their 43rd mission over Italy in a B-25 as grounds for being "a lucky guy". Nor would being a POW in a German Stalag for 19 months be the experience of "a lucky guy". And after escaping from that same POW camp during a forced march, nearly starving to death while hiding in enemy territory before eventually being re-captured by Nazi forces, most people would dismiss any notion of Lady Luck being on their side. But Andy Ramotnik escaped again, and evaded capture again, hiding in some since long forgotten barn until the war ended. And then, wandering down an Austrian country road, he found a US Army Major who brought him back into the safe fold of Allied territory. 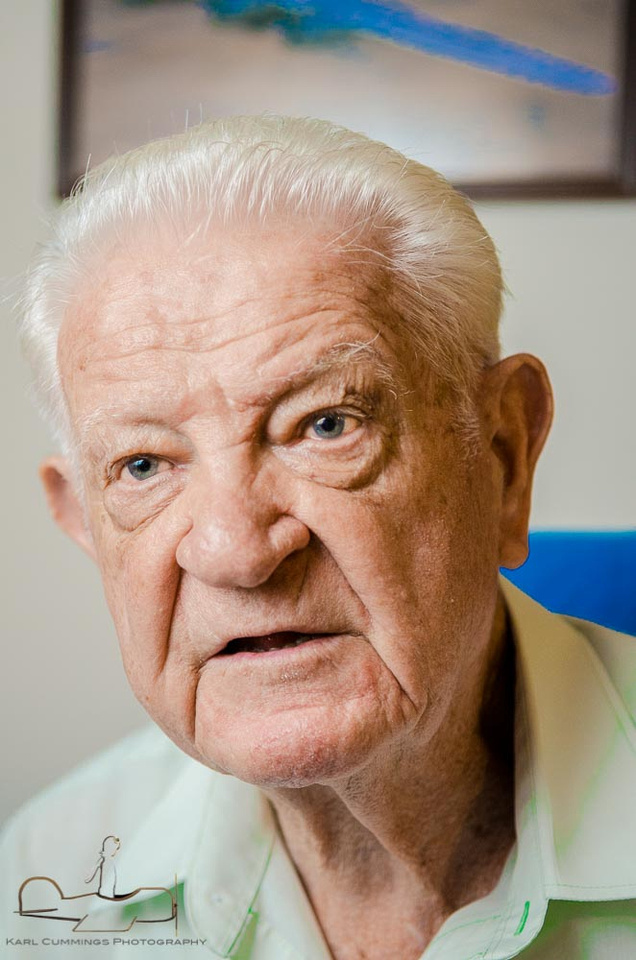 To sit with Mr. Ramotnik is to sit in the presence of strength. Of grit. Of self determination. For 69 years following his liberation from Nazi imprisonment, Andy Ramotnik has lived by two mantras: Education and Physical Activity.

A retired Master Sergeant in the US Air Force, Mr. Ramotnik understands the value of an Education. Following the end of WWII and the establishment of the United States Air Force, the dogma of technology became his focal point. A high school drop-out, Mr. Ramotnik harnessed the same determination that allowed him to survive a Nazi POW camp and learned the trade of Avionics. He succeeded. He instilled in his three children the same love and appreciation for Education that he fought so hard to earn, all of them earning their college degrees and even having the joy of seeing his daughter become a college professor. Then after 21 years of faithful service to the US Air Force, Mr. Ramotnik retired. Yet he continued to ply his hard-gained knowledge and furthered his own Education in the Avionics field as a tech-rep for Northrop Grumman. It was during this stage of his life that Mr. Ramotnik experienced his own personnel epoch, his meeting of now retired Navy Captain John Butterfield. 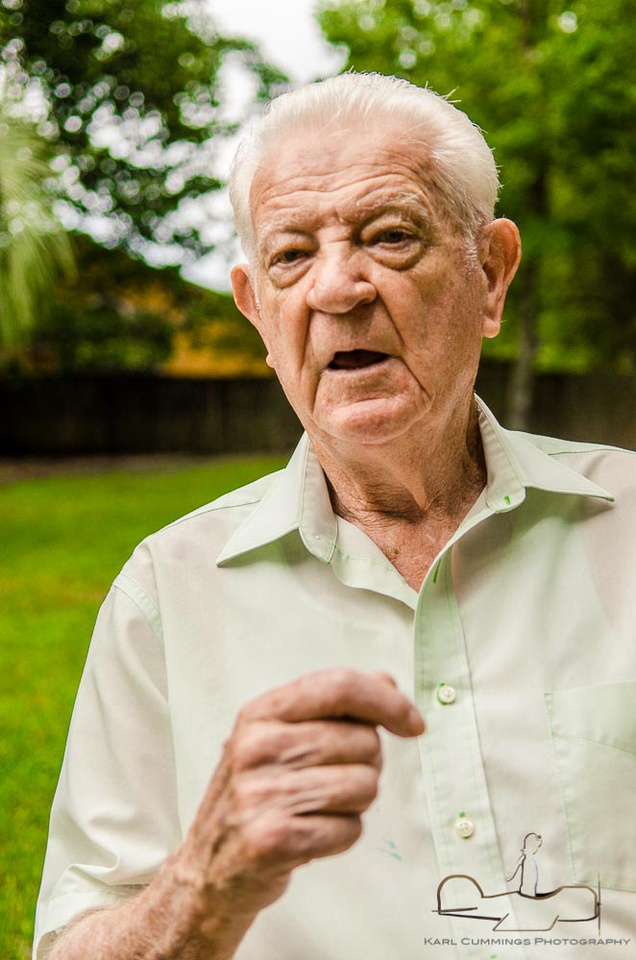 There we wereAnacortes, WA based Portraits and Fine Art Photographer 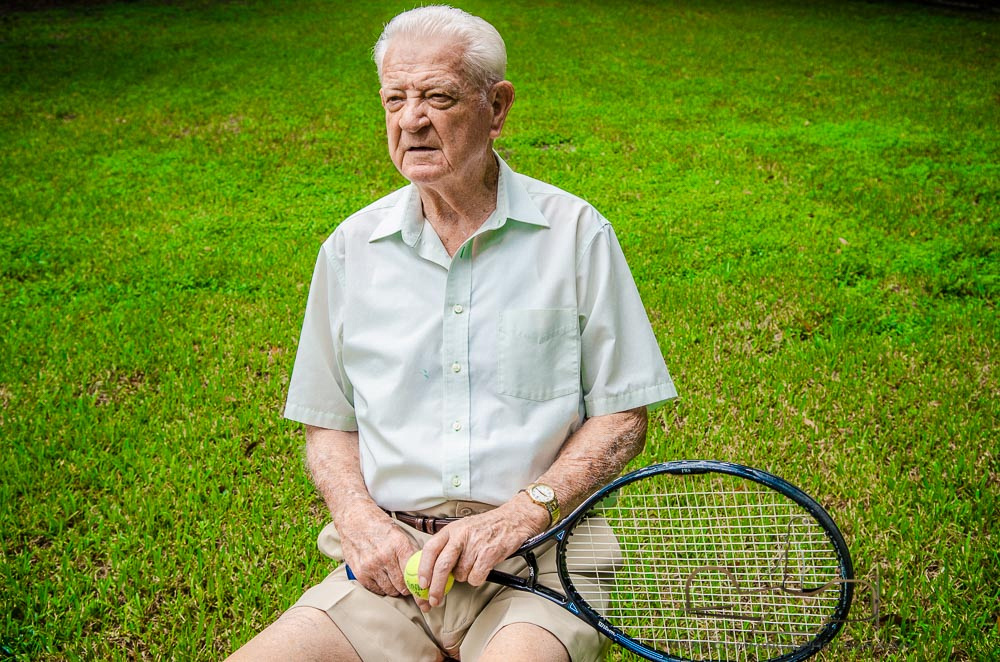 Tennis. The way Andy Ramotnik says it, one would think he is talking about a childhood sweetheart or a long revered mentor. For it has been the game of Tennis through which Andy Ramotnik has maintained his health and independence when so many of his generation have long since succumbed to the trappings of their age. Most importantly, again, to have Mr. Ramotnik tell you, it is because of Tennis that he is "a lucky guy". It was Tennis that allowed him to meet not only John Butterfield but also retired Navy Captain Bob Buehn. It was Tennis that caused Mr. Ramotnik to purchase an extra lot behind his home to build his own personal grass court. It was the love of his adopted game that propelled him to harass and badger the Duval County Parks and Recreation Department to build two new courts in his neighborhood according to USTA specifications. And it was those same courts, one and a half miles away, that he would daily jog to in order to play. When the joints began to ache a little, he would simply walk instead. So while Andy Ramotnik's life can tell you a lot about the importance of Education and Physical Activity, it is the unspoken lesson of relationships that one has the most to learn from.

Experiencing Andy Ramotnik tell you about his participation in life from the front row is nothing short of transformative. You watch a man that, by all normal societal standards should be hobbling around with a walker or cane, quite literally rocket out of his seat to demonstrate how he jumped up and down on the escape hatch of his crippled B-25 in order to open it so he and the aft-gunner could escape. Once it did open, he will demonstrate how he caught himself from plummeting to his death because he had yet to put his parachute on. All this is wonderful for those of us who can only experience it through our imagination, but for Andy Ramotnik it's a tonic. It is the joy of interacting with younger generations and seeing the appreciation and awe that he inspires as he peppers you with questions in a "Choose your own adventure" style of telling his tale that keeps him young. It is the smile that comes to his face when he talks about John Butterfield or Bob Buehn that gives him a reason to stay engaged in a vastly different world than he ever knew. That is the real lesson to be gleaned from Andy Ramotnik.

It is not the awards, achievements or even experiences you have accumulated in your life. Nor is it even how many degrees you have earned or how many tennis matches you've won. It is about the people that have made you better. It is about the people that you have brought joy to and the joy they have returned ten fold. It is about the relationships that will last even after we have passed from this life. So if a man, who by every measure has had some of the most trying experiences in human history, considers himself "one lucky guy", then the rest of us better listen up. 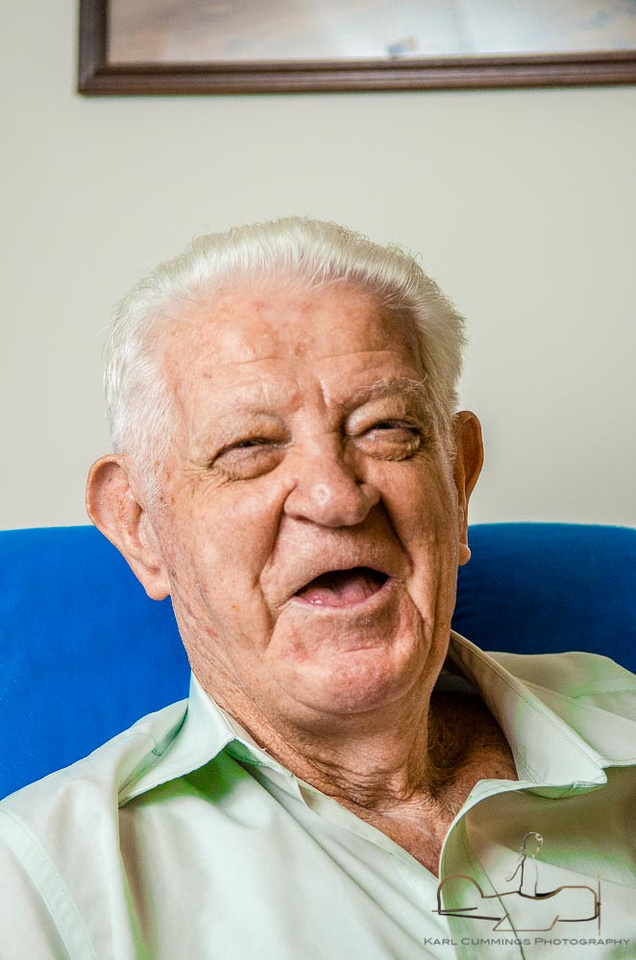 How about that!Anacortes, WA based Portraits and Fine Art Photographer

Coni Sumner(non-registered)
I have recently had to pleasure of becoming acquainted with Andy Ramotnik. I love the twinkle in his when he tells me I will see you in the morning to test you. And he does want to see if I did my homework and if I can answer his question. I love the last photo of him as this is how I see him. Thanks for the article of a true American Hero.
Dale Saffold(non-registered)
Mr. Andy may be "one lucky guy" but we as a country are so lucky because of the sacrifices, grit and determination of people like him!! God bless you Mr. Andy and God bless the United States of America!! Still the best place in the world because of people like you!! I salute you!!!
Bob Buehn(non-registered)
Wonderful tribute Karl, both in words and pictures. Fitting for a great guy who is an inspiration to us all!
John Butterfield(non-registered)
Beautifully written and it certainly captures the stories and spirit of a grand old man who has inspired others to do more and give more. I consider it an honor and a great joy to have made a lasting friendship with Andy. He reflects the finest of a Great Generation. A salute to Andy, the right stuff! With utmost adoration and respect, John Butterfield
Karl Cummings Photography
So glad you enjoy them Ms. Salvatore! Just goes to show how long and far Mr. Ramotnik's influence and friendships are!
No comments posted.
Loading...
Subscribe
RSS
Recent Posts
One Lucky Guy
Keywords
Andy Ramotnik Greatest Generation WWII POW WWII Vet WWII Veteran
Archive
January February March April May June July August September October November December
© Karl Cummings Photography
Powered by ZENFOLIO User Agreement
Cancel
Continue